About The Barnes Firm Jingle Contest

Inspired by the car accident attorneys jingle, The Barnes Firm announced the Jingle Contest, in which contestants had the opportunity to showcase their talent and creativity for a chance to win a $10,000 grand prize.

“You’ve heard the jingle, now it’s your turn to sing it!”

The Barnes Firm Jingle Contest was promoted throughout California in their office locations at the time (San Diego, Los Angeles, and Oakland). If you haven’t heard the jingle, you can listen here:

To participate in the Jingle Contest, contestants were told to submit their version of The Barnes Firm’s famous jingle. With so much talent across California, contestants had no restrictions – submissions could be fun or serious, specific to a certain music genre or era, created alone or with a group of friends. 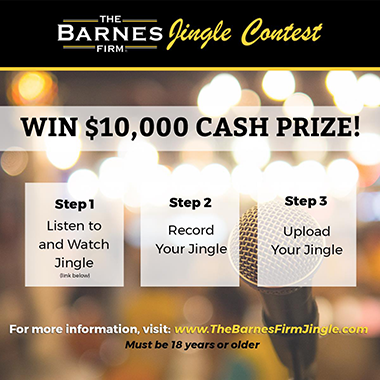 The contest was highly promoted with iHeart Media California across radio, social media and digital channels. As well, The Barnes Firm encouraged participants to create and submit a unique jingle actively on The Barnes Firm’s Instagram, Facebook, and Twitter.

Officially taking off in the summer, The Jingle Contest ran from mid-June through late July. To make things easy, contestants only had three requirements to enter:

By the end of July, the top 20 jingles were chosen by official contest judges and posted on The Barnes Firm Jingle website.

Once the judges finalized the top submissions, listeners could then vote on their favorites with added prizes for those who took part in the voting process.

In addition to the Grand Prize of $10,000, there were five $100 prizes awarded to visitors who voted for their favorite jingles. Voters were then encouraged to share their top picks on social media and use the hashtag #TBFJingleContest.

On-air personalities from iHeart Radio stations in Los Angeles, San Diego, and the Bay Area invited listeners to participate in the contest during morning and afternoon drive conversations.

Once the window of time passed for voting, the top five jingles were selected by the official judges with weighted consideration from the votes. The contest was broadcasted across iHeart media radio stations so listeners were familiar with the contest, got involved with voting, and followed the journey contestants and judges took before the grand prize winner was ultimately chosen. 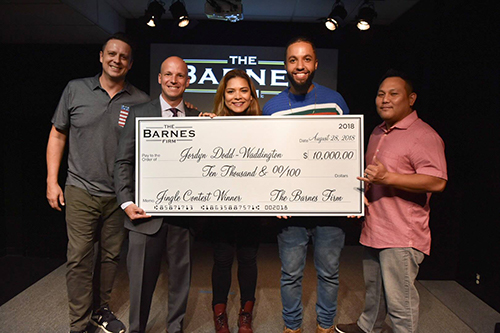 On August 11th, The personal injury attorneys at The Barnes Firm were proud to congratulate the grand prize winner of the firm’s Jingle Contest, Jordyn D., and thank the hundreds of participants who submitted their jingles. Jordyn, of San Diego, walked away with $10,000.

Jordyn’s submission received the most votes and became a fan-favorite. Ultimately, each entry was judged based on creativity, originality, and musical performance. Jordyn;s jingle included a creative animated video to go alongside his unique adaptation of the law firm’s famous jingle.

The fun didn’t stop there. Since so many of the entries The Barnes Firm received were so excellent, the firm wanted to keep sharing the very talented jingle submissions with their social media followers after the contest grand prize announcement. For the following weeks, The Barnes Firm posted a Top 10 Countdown, Rap & Rock Battles, Office Favorites, Best Music Composition, and many more of these great Jingle submissions on their social media platforms.

With so many talented artists located near The Barnes Firm’s California locations in San Diego, Oakland, and Los Angeles, the car accident attorneys were proud to host a contest that facilitated creativity and enthusiasm in the local community by asking followers to put an artistic spin on The Barnes Firm Jingle.